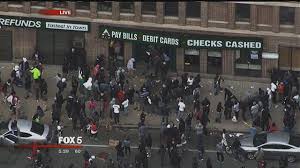 We live in a time where information is at the snap of a finger.  Where people could Tweet out a meeting place and time to organized a protest called The PURGE. They Tweeted this out to High school students in Baltimore. They wanted High School kids to protest the police killing of a 24 year old man who was buried earlier in the day.

The High Schools Kid came out in force. Some had signs made up and marched peacefully and others for the most part well they ran amok Throwing rocks at police, breaking into police cruisers smashing their windows and even setting them on fire. In other parts of the city Kids even went into a cvs pharmacy looted and at the end they also set the pharmacy on fire. in another place in town the kids where seen breaking into a check cashing place and also breaking into a mini mall.

I could understand people protesting and marching in unity when we all seen what police officer are doing all around this country. We all know that this is a time for change and we really need to find solutions to this problems. Do we really need to loot our own stores and burn them down? our pharmacy? really a check cashing place? Now I really understand the frustration I live in the inner city and trust and believe me when I say I have seen and lived the police wrong doing but where are people going to go cash their checks on Thursday or that family member who needs that specific medication that they get from that cvs?

I don’t get how people could burn down their own City and towns. I feel that our youth are getting cheated out of having pride in their community. Has Government failed us or have we failed our Government? The truth is that it is a little of both. We don’t go out and vote as many people think that voting is rigged one way or the other. Some people just let things happened for they live just by saying its not any of my business and look away and other just live day by day.

We are all being cheated at this time as I don’t see any real civil activist out here. Where are the good man and woman of this country that would fight for the little people for the injustice of this world without looking to be financially compensated? People it is time to unite as this is not a black or white issue this is an America issue.